On SALE NOW!! at Amazon and elsewhere!

Welcome to the Shit Show:

7 Secrets of the Cannabis Industry 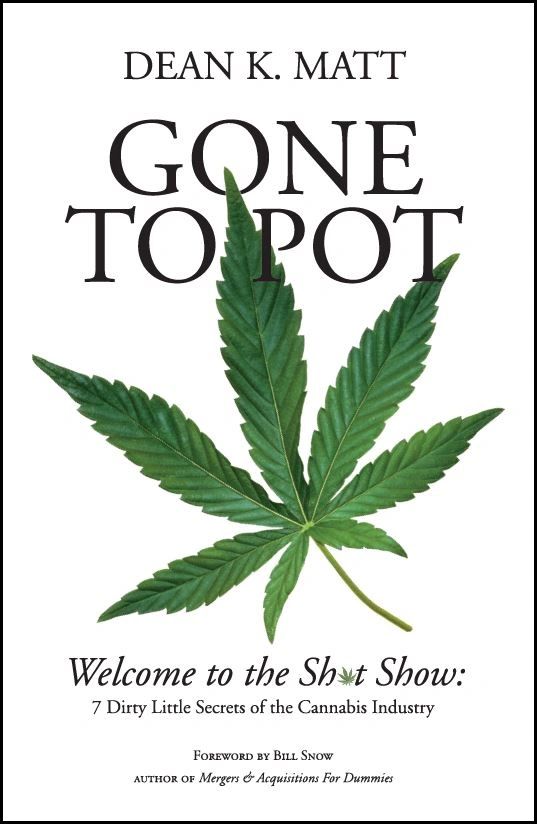 author of Mergers & Acquisitions For Dummies

“The caravan” was a term I heard throughout my childhood, my teen years, and well into my adult years. It was a term my father used to describe the phenomena that seems to infect the investment and business world every few years. My father was a CFO and as I proudly tell anyone who will listen, a self-made man who did not come from means. He put himself through college by digging ditches and advanced by virtue of his wits, honesty, and willingness to outwork everyone. After a successful career, which included taking numerous companies public, he retired and split time between two homes, both on golf courses, quietly helped others, donated more than his fair share to good causes, and bragged that he never lost money on investments.

My father passed away in 2017. After he died, I spoke with the professional who managed his money for nearly four decades and learned something I never knew about my own father: He never owned stock in a company unless he was an employee. That wasn’t a total surprise to me. My father was street smart, intimidating, and a skeptic. He had an exquisite bullshit detector and was loath to trust others, especially where his finances were concerned. He was careful with what he earned and while a point can be made that he perhaps lost out on some upside, he never suffered downside losses. His criteria were liquidity, income, and security. Other than ownership positions in companies where he worked, he almost always only went long in investment grade bonds.

That careful nature obviously was the result of growing up during the Great Depression and World War II. My father had no safety net, no inheritance, no assistance, no stipends, no handouts, never received an allowance, and other than his mother rising early to prepare him breakfast in the early years of his professional career, he received little to no help from his family. His father gave him a last name and, perhaps, two or three good bits of wisdom. I mention this because as I read Dean Matt’s fascinating dissection of the bourgeoning cannabis industry, I instantly recalled my father’s oft-repeated “caravan” analogy. “Every five to ten years,” my father told me many times, “a new caravan of assholes shows up on Wall Street with a new can’t miss idea.”

Those plaintive pleas from “the caravan” were roundly and summarily rejected. At times, my father recited the specifics of each of the periodic “can’t miss” flare-ups. Based on his firsthand experience, he could trace the caravan’s lineage of bubbles to the early 1950s. I neglected to jot down the specific examples of his caravan anecdote – one of my regrets now that my father is no longer alive – but from my firsthand experience I can recall the junk bond mania of the 1980s, the Dot.com mania of the 1990s, the mortgage backed security mania of the 2000s, the crypto currency mania of the 2010s, and now, as told from the perspective of an experienced financial executive, a new caravan has pulled into town touting yet another “can’t miss” idea. Ladies and gentlemen, I give you the cannabis mania of the 2020s.

Lack of self-awareness is an attribute of the caravan and each time a new one flares up it has no idea that just a few years prior, a predecessor rolled through town and left in its wake a stream of losses, recrimination, lawsuits, and at times, indictments. The “can’t miss” ideas may vary, but the caravan is the same. The players might be new, but their motivations, characteristics, traits, foibles, and predilections are the same as always. Naïve, wild eye, energetic, enigmatic, persuasive, and glib are their calling cards as they chase ephemeral riches and ill-defined profits from half-baked ideas, wrangle investment capital and board guidance from those who should know better, and extract labor and aspirational hopes from those who don’t. Each caravan, therefore, is not new but merely the latest iteration of a bad idea.

The legalization of cannabis is perhaps long overdue. I personally have no interest in it nor is it a part of my life, but the classical liberal in me also believes society is better when the hand of government is light and individuals are left alone to freely make their own decisions about their lives. Despite myriad missteps and misrepresentations made by this most recent vintage of the caravan, many of which are succinctly and humorously laid out in this book you’re about to read, the legalization – and commercialization – of cannabis will continue to gain in momentum. Genuine successes will happen. Fortunes will be made. And as with all manias, someone, somewhere, will crack the nut and create a sustainable business model, which in turn will be repeated and improved upon. Until then, Dean Matt’s firsthand account of the early days of what he calls “Cannabis 2.0” should serve as a cautionary tale about what happens when the well intentioned, wild eyed naïfs of the caravan, as ill-prepared and sanguine as always, turn a new development into an age-old mania. We’ve seen this story before. And we’ll see it again. The only question is will we learn?

Read a Sample Excerpt from GONE TO POT on the ABOUT THE BOOK page!

Sign up and we'll let you know when the book goes on sale!